Well, you can’t create a game without play-testing. Lots, and lots of play-testing.  We do it in a few stages like most designers. First, there is the play test that happens in the designers head. Those aren’t all that reliable.

But then you get practical and you grab some old pawns, poker cards, and spare chits and make a papertype of your game. I’m not sure if other designers call them that, but I call that one a papertype. It’s the one before the prototype, before art, and before you even know if you’re going to let this die on the vine.

In any event, most of the mechanics can be worked out in papertyping. You tend to play this one with your team family and maybe close friends.  This is where you start looking at balance, scoring, down time, and if people want to actually finish a game. There isn’t much point at worrying about actual game play-time in this version because you are still thinking about rules and what-if scenarios. But you can get an idea for how smooth the game will play and how your scoring is adding up.

One thing about papertype playing though is that there is still way too much assumed knowledge involved. You know what you want to have happen, and you know what you ‘meant’ by the rules but they may not actually say that. Your family and friends tend to know you, and can just ask what’s going on.  So there’s more testing to be done.

Once papertyping is done, and you think this has legs, you can make something more like the actual game components to try out to see how it will feel, and how some of the visuals make it easier or harder to play. Sometimes visuals are crucial to the game play, but sometimes like in roll and write games, they aren’t always as important.

Well with Troll Bridge, we have moved beyond Papertyping, and are in full prototyping. These are near finished components, and the rules are in what I would say is Beta. They are pretty much ready to go, but they are tweakable based on play-testing feedback.

Our US play testers got their copy and were doing some play-testing tonight.  I was on the other end of Skype watching (and trying my level best not to comment) Here’s a couple pictures from today’s play-test of Troll Bridge: 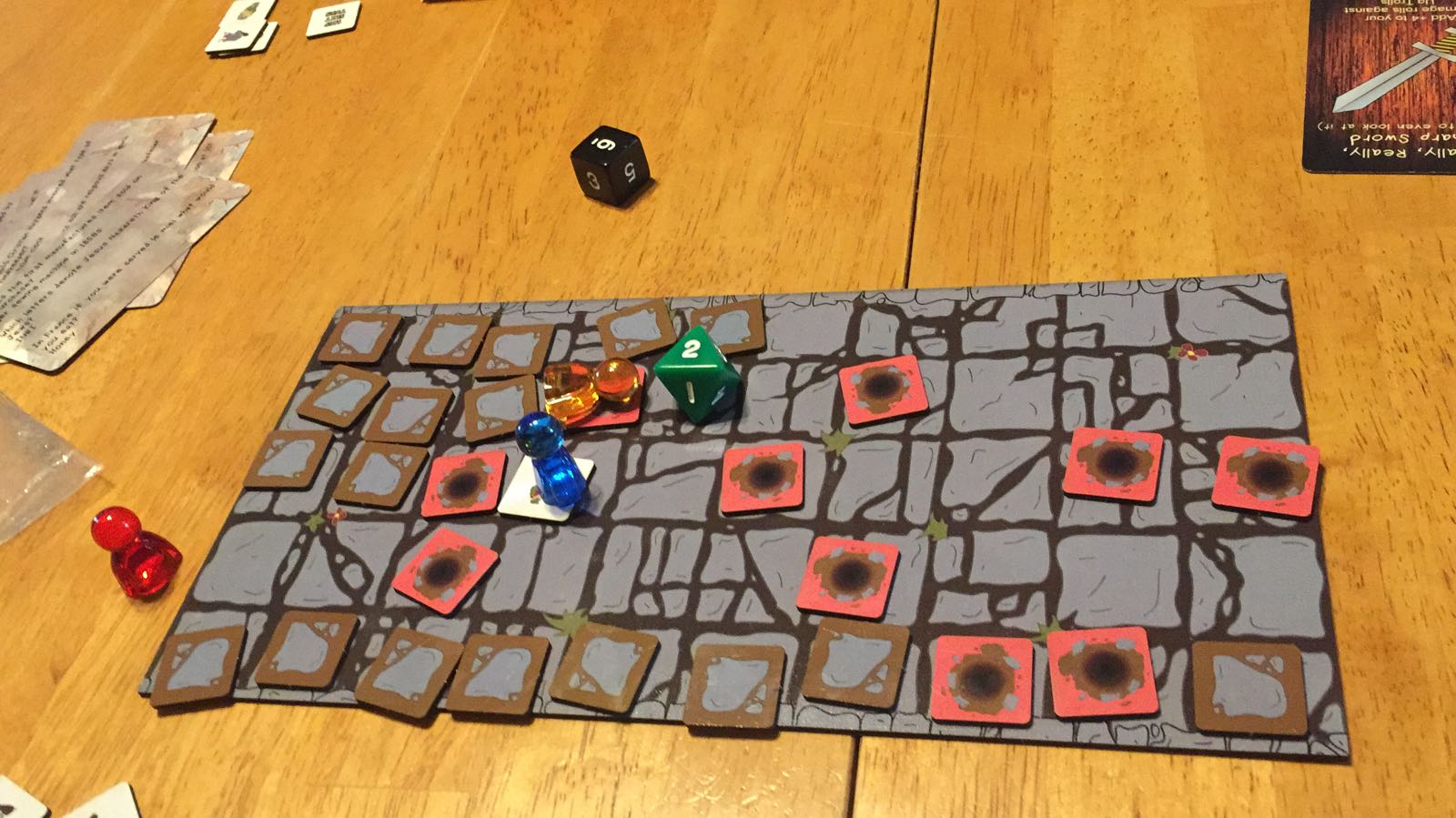 This is a game in progress where one of the players was just taken out by an Ug Troll.  This is an important point in the play test. I’ll explain why in a minute. This is near the end of this game where a lot of the bridge has been traversed but a player being taken out even at this stage has to be checked. 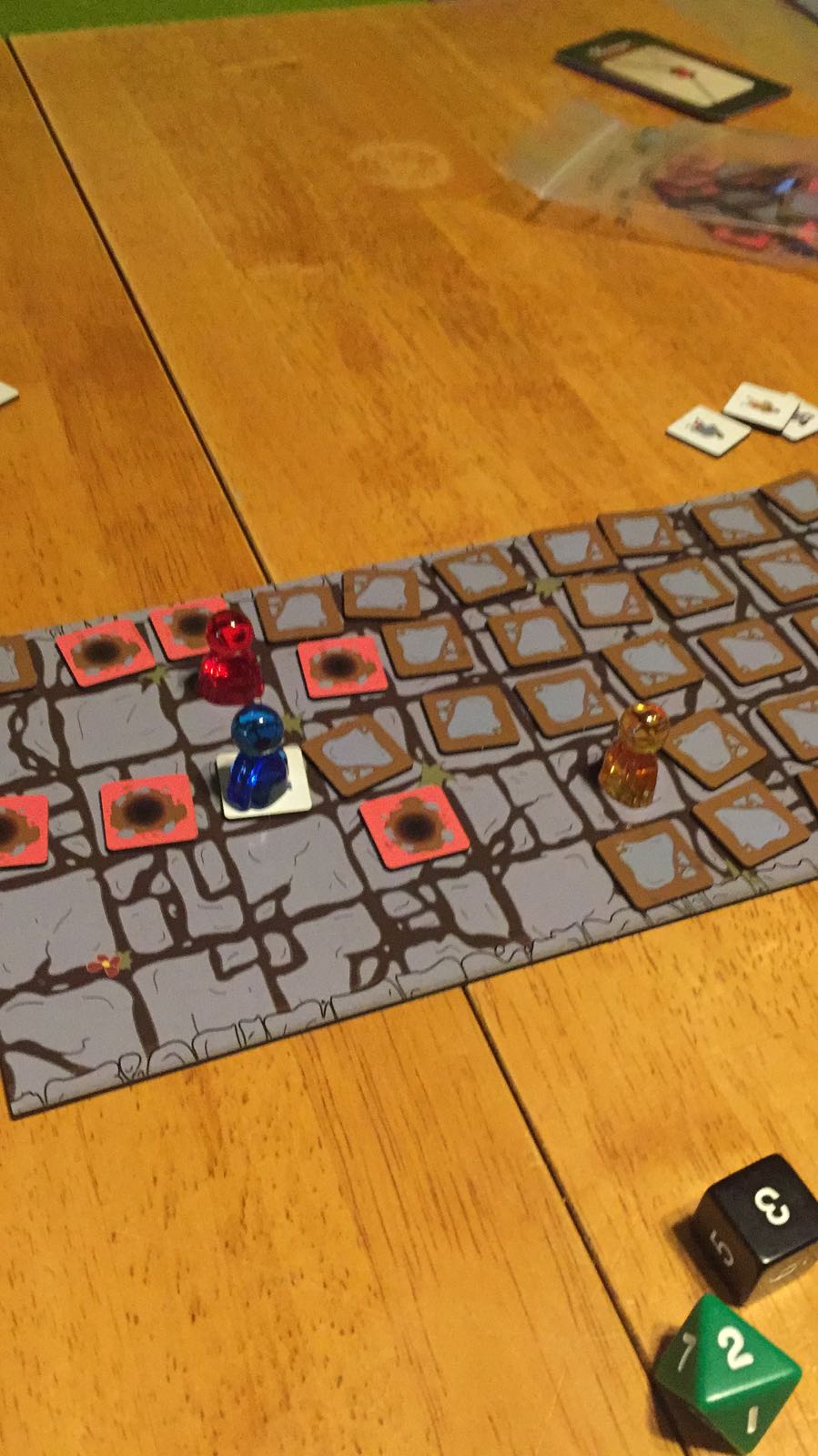 This is a better view of the board in play. The Blue player is currently dealing with a Trollosopher. 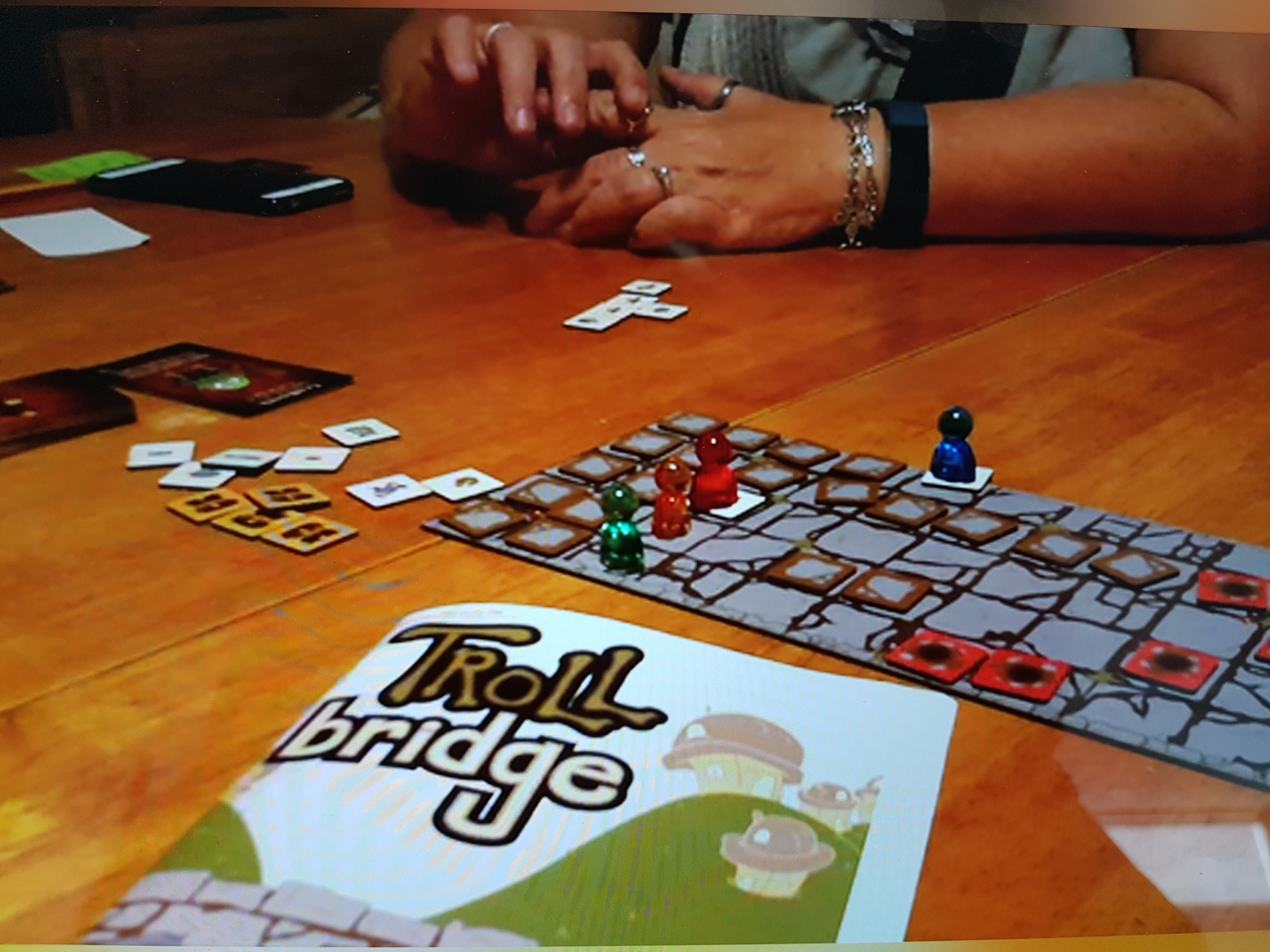 This is just a pic i took of the screen near the end of one of the games with several of the components in the frame.

So this session brought out a few things that mean the rules need tweaked.  Remember that player death? Well, for things like this in my head, and when we ran through it in papertyping it didn’t seem like a big deal and it was a consequence that made sense in the theme and setting of the game. If an Ug Troll knocks out a section of the bridge you are standing on, you die (get hit in the head and driven through a hole in the bridge). Great for maintaining immersion, tension and theme. But, what this meant was that player had to sit idle as an observer for the next little bit while the game finished.

One thing you really need to avoid in games is downtime. If someone picks up their phone and starts Facebooking or reading email, you have effectively failed at making a good game in my opinion. (unless they are posting how awesome it is and that everyone should buy it).

This was really driven home when during the next run through, this happened on the 4th turn of the game. The player was effectively taken out before his second move. This resulted in a rule change.  Now instead of players dying when that happens, they are just moved straight backward to the first available space as if they jumped out of the way.  Yes, there’s a consequence, but it’s not near as devastating as being taken out of the game.

I also realized, although I kind of knew this in the back of my mind, that the scoring was broken. Essentially, getting to the end of the bridge first had way too many bonus points involved. It definitely removed the possibility of a tie or any close races. The scored were like 21 points for the person that crossed first, and the rest of the players were getting like 9 and 12 points. So, it was simple to fix, eliminate the first finisher bonus and just rely on the value of the messages they carry. It helped level it out where everyone was in the low teens for points, but still provided an incentive to cross the bridge first.

You also get little hints. For example, I think there is a pretty good distinction between the Trollosopher tiles and the Ug Troll Tiles. 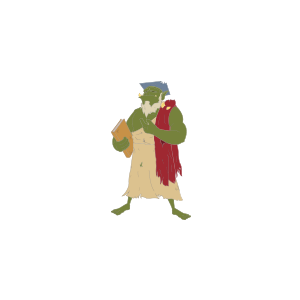 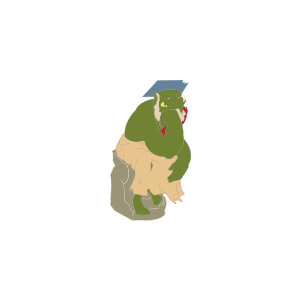 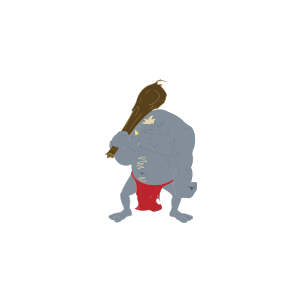 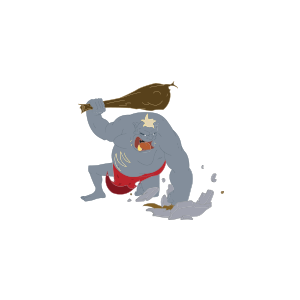 With these, I always figured that the green sking and gray skin were enough to let people know which one. In fact I’m willing to bet that those of you reading this can even guess which are which from the names, and their pictures. But during play-testing one of the players said, ‘I can’t tell which is which. You should take the red sash off of the Trollosopher so it doesn’t confuse things with the red clothes on the Ug Troll.’

I have to admit that caught me off guard. But the player felt that was the best way to solve the problem. I figure the skin color was enough, or the club, or the hat, but if you aren’t wearing your glasses, you might miss those details… yeah, I’m still not convinced.

Anyway, it’s these types of things that papertyping doesn’t always reveal. I have to say though that I think we are about there. Only a couple rule tweaks, which are pretty easy compared to anything that you’d need to do to the components, cards or other manufactured things.

So, we’ll keep play testing, then get our near final runs ready for GenCon 50. We’ll be running our final play testing there, and we will do our Kickstarter during GenCon for our release in October at PAXAUS 2017. If you are at either of those, look us up. I’m happy to take you on a run of Troll Bridge.