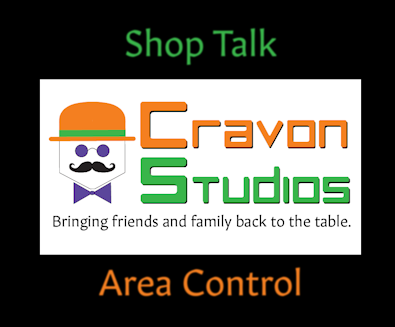 Area Control is currently defined on Board Game Geek as:

“The Area Control mechanic typically awards control of an area to the player that has the majority of units or influence in that area. As such, it can be viewed as a sub-category of Auction/Bidding in that players can up their “bids” for specific areas through the placement of units or meeples.”

This says that this could be viewed as a sub category of Auction / Bidding. But you up your bid by placing more units in the area.  I would disagree with this because if that’s how you would look at it would be closer to a sub category of work placement. If all of your units were in a pool and you could place more into the area you want to control simply by taking them from your pool and dropping them into the area as in El Grande it would qualify. But what about Risk and most of the other Area Control games?

Risk is a mass market game and one of the more preeminent area control games.  You can’t just drop units from your pool into any location to ‘bid’ for it. Units have to be moved from an area you already control, into an area you are trying to gain control of. They have to be moved into that location from adjacent locations where you already have units, and hence control of the location.  The areas are normally pre-defined which is what makes this different than Area Enclosure where your unit placement defines the area to be captured or controlled. We’ll discuss this in a later episode.

Area control is not often, if ever, seen by itself. There is usually one or more accompanying mechanics that allow you to move or place units in the area to be controlled. This can be multiplication of forces as in Risk which are then moved from occupied areas to target areas, placement of units from a pool such as El Grande or Fate of the Elder Gods and moving units from their point of origin to the area you want to control as in Scythe. So to discuss this in a bit more detail the placement of the units to gain control of an area is important to strategy, as well as how difficult it is to gain control of an area.

You may have heard the term 4X game. That is eXplore, eXpand, eXploit, eXterminate. A 4X game uses the Area Control mechanisms quite a bit. In order to eXploite an area, you first need to control that area. In most 4X cases you gain control of areas by eXpanding into them. Age of Empires and Runewars are both examples of 4x games that use Area of Control.

The core of area control and why you take control of areas is usually for game-time benefits such as recourse collection, points accumulation, etc. or straight up victory points counted at the end of the game. Normally control mean that you, and you alone, get the benefit of the area you are controlling. This means that other players do not receive the benefits of the area. There are exceptions to this rule where some games allow joint control under cooperative circumstances.

This mechanism gives you the ability to allow players to work to own something in the game. They fought for that piece of game board and now they will reap rewards for it. It imbues them with a sense of agency, and a sense of ownership or personal investment. This is a very attractive mechanism to get players invested in your game. This can also play into Loss Aversion. Once players have taken control of an area, they feel worse if they lose control, compared to how good they feel when they gain control of a different territory.

In Area control, you normally have to have at least one unit in a location for it to be considered under your control. This is representative of you defending the area you took control of. In Risk you do not get the troops added to your units if you don’t’ have at least one unit in a territory to indicate you control it. In games like Tiny Epic Kingdoms, if you don’t have one of your meeples in an area, anyone can move into that area and collect the resources from it. But if you have at least one meeple there, unless you are already at peace with the intruder, you go through the War process to see who maintains control of that area. However in this case, as in some other games, there is a twist. If you both have a meeple in the territory and you are in an alliance with that player neither of you control it, you both do. So it is possible to have situations in which multiple people gain benefit from a territory.

In the case of Risk, you add to your total units available by adding units to any territory where you already have control. You add as many units as territories you already control. This makes you stronger the more area you control. Considerably so actually.  But you can’t gain control of any areas that are not adjacent to ones you already control. This is because you have to move from currently controlled areas to adjacent ones. You can’t just air drop units into any area on the board. This can make the speed at which you gain control of more areas slower. If you want to get to an area that you do not yet control, you may also have to go through areas controlled by other players, in which case you have to go through combat to first take control of their intermediate area before moving on to the target one. While this seems convoluted, it’s actually the core of the game. This is what Risk is all about and why Risk games can take days.

Other games such as El Grande allow you to place your units (Knights / Caballeros) in any of the areas you like within a defined region of the board. That region is defined by where the King marker is currently located. All of the adjacent areas to the area the King marker is currently occupying are viable locations for you to place your units in.  So it’s not just any and all regions that you drop units into. However, you can put your units in those areas in any combination you choose. That is to say, all of them in one area, one in each available area etc.

Now technically in El Grande because units of multiple players can occupy the same area and the person with the most units in the area gets the score for the area, it is an Area Majority game which I see as a subset of area control.   Unlike Tiny Epic Kingdoms where control can effectively be shared, in El Grande you either have majority, and hence control, or you do not. Whereas in Risk only one player’s units are in the area at any one time which is more of a pure area control. You are not only placing units into the area, but making sure other players do not have any in the same area. This is more control that just making sure you have the most.

For comparison another example of Area Majority is Fate of the Elder Gods. If you have at least three cultists at a location, and you have more than any other player, you have control of that location. It doesn’t matter how many cultists, or indeed investigators are also in that location, the player with the most cultists at the location, has control.

I think that area control can be temporary, semi-permanent or permanent. An example of intended temporary area control is Lords of Waterdeep where you use Worker Placement to control a particular building or location for that round. While this isn’t traditional Area Control where you are trying to keep that area for the duration of the game, you do control the location, and you are the only one that receives the benefits of the location for the round. You will lose control at the end of the round regardless of your actions or another player’s actions. This is also the case in Fate of the Elder Gods. If you do not have a majority control of a location on the board, you can roll a die to try to get temporary control for that round, but you do not maintain that control and have to either gain majority control next turn, or roll again on the next round for temporary control.

Permanent control is like in Tic Tac Toe where once your X or O is in the location, it is there until the game ends and nothing can be done to change it.  I should note that even in games where permanent control is implied, it can be given up voluntarily. For example in Risk if you are operating from Asia, and you have control of the Middle East, Afghanistan and Ural, you may choose to move all of your forces from China into say, Afghanistan to bolster your front lines. You have effectively given up control of China in this case. I’m not condoning this as a good strategy, but it demonstrates the point.

So to summarize the core aspects of Area Control are:

Let me know your favorite Area Control games in the comments.