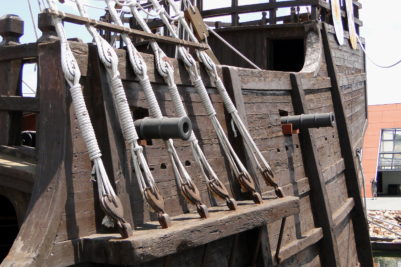 I’ve been working on a pirate themed game that uses probability to determine damage inflicted by cannons. When it came to dice I wanted to know if re-rolling or rolling more was more preferable. Now before you just say Ameritrash and discount the inclusion of skill let me set the context. In this case it’s a game about the Golden Age of Piracy.  The dice roll is for ship to ship combat. In the 1600’s and 1700s, ship cannons were not modern-day computer controlled gun platforms. 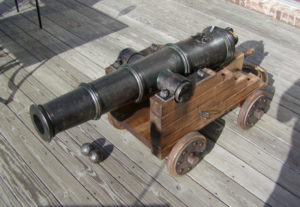 Period cannons were comparatively short barreled, smooth bore cast iron hunks of metal that focused the energy of burning powder in a general direction. The powder itself had an inconsistent burn rate, and the loads were also inconsistent. Not to mention the cannon balls themselves were only mostly spherical and not exactly consistent in size and shape.

So, let’s add the environmental conditions to this. They were normally fired through portholes which offered limited visibility to the gun crew. And of course, since they weren’t fixed to the deck, they weren’t always in consistent spots when fired. Now let’s toss in the fact that your target was on a rolling sea. You couldn’t move the cannon smoothly enough to match the moving target. It was about timing. Of course, you yourself are also on a moving platform so the cannon firing had to be timed to fire, including time of flight, and meet the target going up or down.

Therefore, age of sail sea battles often happened at quite close range. There were sometimes over 60 guns facing the same general direction on a broadside of a ship. More guns firing gives you the shotgun effect. To say Luck played a part in sea battles is an understatement. 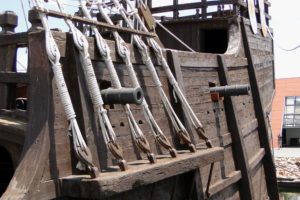 I told you all that to tell you this, I am using dice modified by a gunnery skill to determine hits / damage, and I think it makes sense. Because I’m using dice the thought of how gunnery skill affects the roll is something I’ve been pondering. Should being good at something like this just provide you more luck or should you feel you have more control of the situation.

In this case, it seems to be that there are two or perhaps three ways you can have a skill affect the roll. One of them is to have a gunnery skill bonus apply to each die rolled. This is effective, but it just applies a broad level change which isn’t what I wanted.  The other two are more interesting in this case. I can allow the characters’ gunnery skill to add dice to the roll, or it can be used to re-roll dice that do not hit.

This is where the analysis of interesting choices comes in. Essentially, if you allow re-rolls it gives the player a feeling of having more decisions. Potentially they feel that they control their fate more by being able to re-roll.  While the other choice, rolling more dice is one of those more visceral things. There is something satisfying about rolling a bunch of dice. Adding more dice to the roll is also appealing but in a different manner.

Does it make a difference?

The question is which to choose? You must think if one or the other would offer more of an advantage. Does rolling more dice have a higher average roll? Do the higher numbers have a higher probability of coming up when you roll more dice as opposed to re-rolling lower numbers? Let’s have a look.

When you think about the effect, let’s say a ship’s gun configuration allows you to roll 3 D6. You have a numerical range from 3 to 18 with the values 10 and 11 having the highest probability of coming up. What about individual numbers coming up? Each individual number on each die has 1 in 6 chances of appearing. If you are trying to roll 5’s and 6’s rather than just a higher collective number the situation changes a little.

What you end up with is this comparison.  If you roll 3 D6 together, do you have a higher probability of getting 5’s and 6’s than you do if you roll 1 D6 three times?  Essentially, you are still generating a random number from 1 to 6, three times. One is all at once, or in parallel, and in the other it’s sequential. Each individual die, and hence 3 of them have the same 30% chance of producing a 5 or 6.

Do players feel they have more agency when they get to re-roll unfavorable results, or do they like the visceral feeling of rolling more dice? I would say that the re-roll gives a player a feeling of more control while the additional dice are just more fun. I would also say that rolling more dice lowers the ‘fiddly’ factor a bit. Rolling 5 D6 and checking for 5’s and 6’s is faster than re-rolling and checking again.

What do you think? Re-roll or more dice?

I've always wanted to be a game designer. Since I started doing game design and…