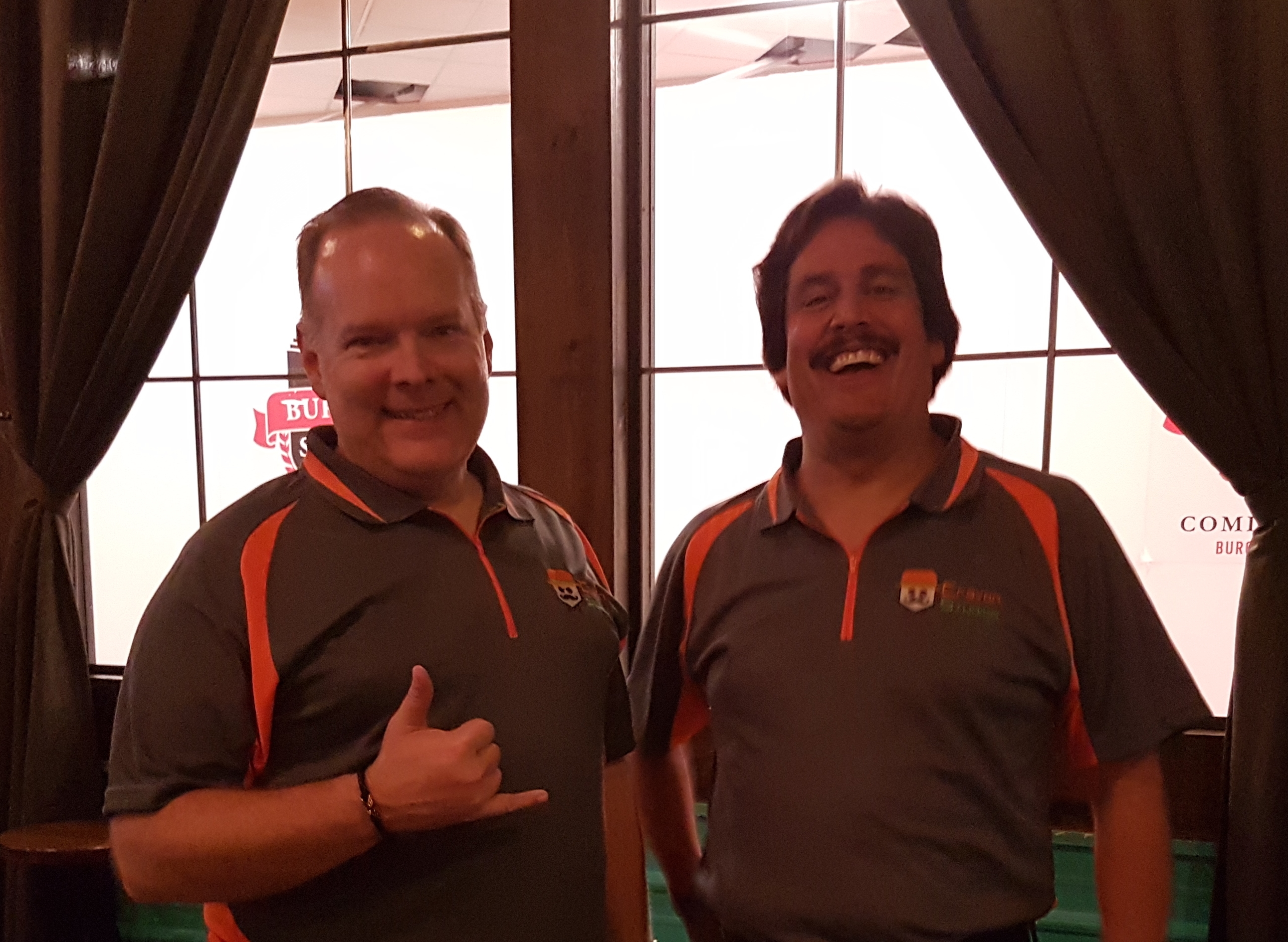 I’ve just returned home from GenCon 50. It was amazing. The first time GenCon has sold out. Yes there were a lot of people there but to be honest it didn’t feel as crowded as I expected. The previous times I’ve done it always seemed like you were shoulder to shoulder in the dealer hall. This time there was some room to move. Given the record numbers I think overflowing into Lucas Oil Stadium really helped. For us it was all about GenCon 50 Playtesting. This year we went from the other side of the fence.

This year, we were there to get some playtest time on our upcoming games Kickin Your Ass and Troll Bridge. We were fortunate enough to be in the First Exposure Playtest Hall which is run by Double Exposure.

It was a great experience. We were able to get our game in front of people who know games, and that aren’t coloured by any former knowledge of us or the games themselves. This is how blind playtesting is supposed to go. The experience at GenCon was a great environment to test the games. The FEPH allowed us to focus on the testing while the Double Exposure crew focused on managing tables and getting testers.

I recruited my friend Carlos to help me out. 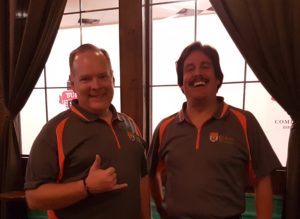 This allowed me to keep quiet and see how the game was received. An interesting side effect was that it also allowed me to see how the game was likely to be taught by someone who has played it, but that wasn’t involved in the design process other than playtesting early prototypes. It occurred to me during the process that this is actually a pretty important factor to evaluate. Many games are taught more than they are learned from the rulebook. Every gaming group has that person that reads the rules figures out the components and then teaches the game to the rest of the group. 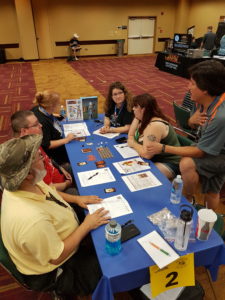 For Troll Bridge, there were a few things I really wanted to check. Most importantly, since there is a trivia aspect, was the trivia too hard? In early testing we got mixed reviews. Most people liked the fact that the questions were not typical and that they tended to be on more obscure topics. The other side of the coin was that this made it much more difficult.  So we went through all the questions and made them more generic, included more pop culture etc. Made it closer to Trivial Pursuit style easier questions. We don’t want people to feel stupid, then tend to not play again when that happens.

I also needed to see if the game came out to a close finish. I like games where everyone feels like they are in it to the end. I don’t know many people that enjoy playing a game where one player jumps out in front and by turn 3 the winner is a forgone conclusion. If you are one of those, I’d really like to hear from you. So these tests were to see how close the finishes would be. 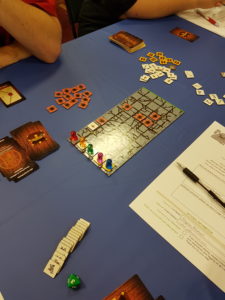 Some of things I wasn’t really looking at were components, art, and the tactile aspects of the game. These are things we testing a lot pretty early on. Our playtest copies of the game are using early components. We knew which art we wanted to go with on the troll tiles, and the card art has been finalized. These components are actually a bit smaller than the production ones will be. So we know that if people can handle and manipulate these well enough, the slightly bigger pieces will be even better.  Since no one had ever brought up component size in playtests before, I’m confident that these aspects are going to be fine.

What I did discover though, much to my chagrin, is that if you purchase batches of trivia questions you need to proofread and vet them all. You can’t just audit them. It’s trivia, the answers need to be correct. In the age of the internet, it’s pretty easy to check typos included. In the text I have typed I use spell checkers and grammar checkers. But the trivia questions are going from .csv to spreadsheet to image. The best spell checker and grammar checker in the world won’t tell you if one of the answers is incorrect.

Overall the results were really good. Better than I expected actually. New game designers all have the same problem…What if people hate my games? What if they can’t even figure out the rules? All of the standard imposter syndrome things. Fortunately with Troll Bridge, everyone really liked it. One of them so much so that she really wanted to buy the playtest copy. That’s probably a good sign.

We were also there to run Kickin Your Ass through some blind playtesting. With the FEPH, we got 4 two hour time slots. We used two for Troll Bridge and two for Kickin Your Ass.

This is a party style card game with an obvious adult slant. It’s full of puns and tends to get the players into bantering. We had a good group for all of our games, but the first 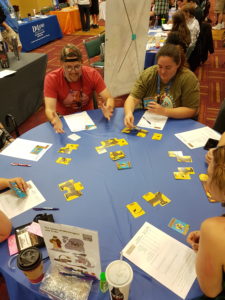 Kickin Your Ass group had plenty of fun and cut loose a bit. That was the reaction I was looking for. Another designer in the FEPH even commented that he heard plenty of laughs coming from our table so he figured things were going well.

Because Kickin Your Ass if a relatively short card game I had the groups play through twice before evaluating it. The reactions were almost all positive. One of the suggestions that came up fairly regularly was that you should be able to play the red attack cards more than once per turn, or that there should be more of them than the green defence cards. While I love all of our playtesters, and I listen to them all, sometimes you have to nod, smile and say “I’ll take that under consideration” then move on. In this case while it seems like a good idea on the surface, having the attack cards be more effective and not balanced against the green defence cards means the game goes much longer, like more than double the targeted duration.  So yes dear playtesters I did hear you but I don’t want this to be a 45 minute game.

The last group ended early enough with Kickin Your Ass that 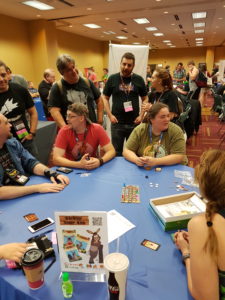 one of the players who was in that group that was also in the Troll Bridge test group asked if she could show them Troll Bridge. Having a player who has only played the game once, ask if she can show it to another group of players is an excellent thing to hear for a designer. She is a genuine fan, and while I wouldn’t sell her a playtest copy, I did give her one for free.

One other benifit of being in the FEPH, when people are having fun playing your games, it draws a crowd and even more people learn about your game.

Now that we are done with testing, and ready to start production, it’s on to marketing. There are lots of way to market a game and I’ll be documenting our adventures here as well.

If you went to GenCon 50 I hope you had a great time and may you avoid Con Crud. I look forward to playing some of the games I got, and getting our games into production. Our next convention adventure is PAX Australia. If you are going, I hope to see you there.